The Power of Increasing Savings

The Power of Increasing Savings – A Comparison

Compound interest based on long-term investing is rightfully celebrated as the way to build long-term wealth.  An equally important, but lesser discussed corollary is the power of increased savings, especially during the early investing journey.  This one, two punch can really supercharge your financial future in several ways.

Figure 1. Cumulative Investment and Return from investing $1200 per year with a 7% annual return over 40 years

Saver B decided that instead of keeping their investment constant, they would slowly increase their savings rate by 10% each year until it got to $6000 per year (or $500 per month).  At that point, they continued to invest at that level for the remaining 40 years.  Saver B invested a total of $186,719 and ended the 40 years with an investment value of almost $729,000.

Figure 2. Cumulative Investment and Return from starting a $1200 per year investment and increasing it by 10% each year to $6000 per year with a 7% annual return over 40 years

Yes, Saver B had to invest $138,000 in additional funds over those 40 years, but the increase each year was relatively small (Figure 3).  The first increase was only an extra $120 per year ($10 per month) and the final year increase after 20 years was only about $600 for the year ($50 per month).  But this resulted in significant long-term gains.

Figure 3. Saver A vs Saver B cumulative amount invested 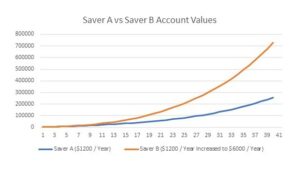 Figure 4. Saver A vs Saver B investment value

In addition to the increased value of their savings, one of the key points of this delayed gratification is the fact is that Saver B has learned to live without needing that $6,000 per year.  Assuming Saver A and B have the same income, Saver B will now have to replace that much less income in retirement to maintain their same lifestyle.  This means their increased savings will be stretched even further.

The easiest way I’ve found to do this is when I received a pay increase either through the annual cost of living adjustments, the every two-year military longevity pay raise, or at a promotion.  Making the change at those points means you won’t notice the change because you weren’t used to getting that money in the first place.